In 1973 I was fresh out of art school and living in San Francisco.

Personal computers didn’t exist yet. Neither did the internet. I’d never been in a room with a computer, and had only the vaguest notion of what software was.

That was the year I started making electronic art. I began by experimenting with video synthesizers. After a while I felt I’d gotten as far as I was ever going to get by twiddling knobs and switches and started looking for a more precise instrument. 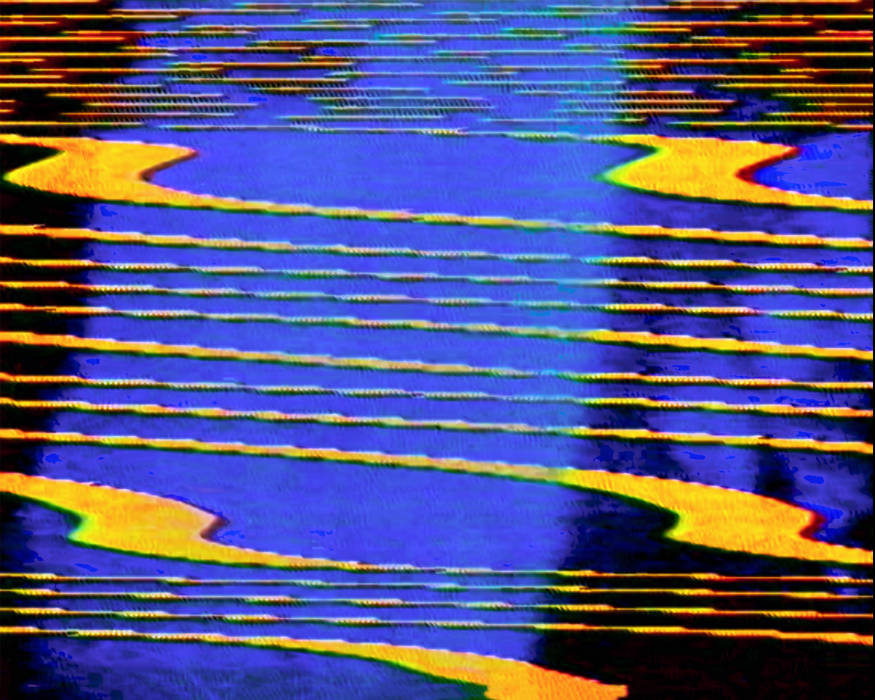 After an unlikely series of events, I wound up at PARC, aka the Xerox Palo Alto Research Center, on the evening of January 9, 1975. There, a computer scientist named Dick Shoup showed me a device he’d built he called a “frame buffer” that used computer memory to control the color of every dot on a video screen.This was my first encounter with pixels.

Dick and his colleague Alvy Ray Smith had hooked an electronic tablet up to the frame buffer and written a program for it they called Superpaint. That night I created my first digital image. 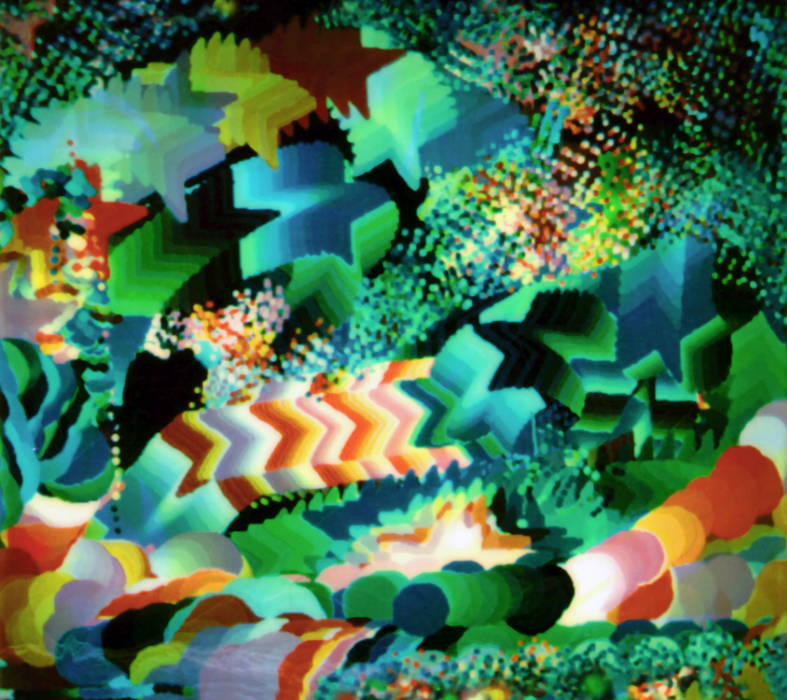 After another unlikely series of events, the following year I joined NASA’s Jet Propulsion Laboratory’s funded-but-not-yet-built computer graphics research lab in Pasadena as its Artist in Residence.

The JPL Graphics Lab was the brainchild of Bob Holzman, a high-tech visionary who loved art. Bob worked out a unique deal for me with JPL: as long as they didn’t have to pay me, I had 24/7 access to the Graphic Lab’s computing facilities and full ownership of my work. That’s how JPL became my art studio for the next thirteen years. In its prime, there was nothing like it anywhere in the world.

Getting the lab up and running turned out to be much more difficult than anyone had anticipated. It took a year and a half before I was able to light up my first pixel there.

When the JPL Graphics Lab finally came on line around mid-1977, Bob hired Jim Blinn, a brilliant young computer scientist who wrote most of the lab’s software.

Aku was the first image I created at JPL. When Bob saw it, he commissioned me to make a print of it, which he framed and hung in the entrance to his home. That meant a lot to me, because at that time most people, especially in the art world, thought the idea of making art with computers was laughable. 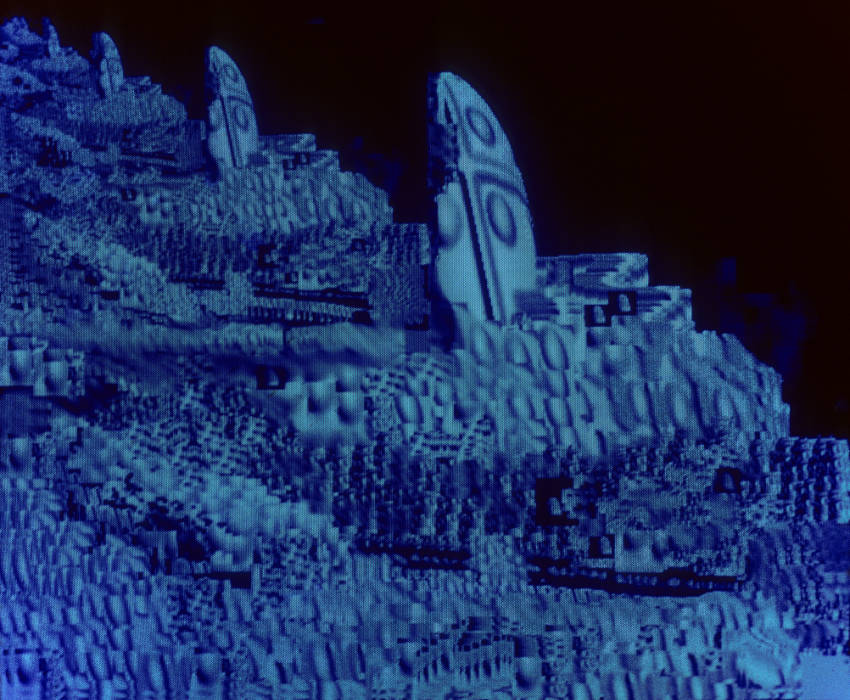 The JPL Graphics Lab’s NASA funding was tied to producing computer-generated 3D film simulations of the now-historic Voyager spacecrafts’ planetary flybys of Jupiter and Saturn before they actually flew by the planets. Since this kind of visualization software didn’t exist yet, Jim had to code it from the ground up.

As a result, the lab’s software was in a constant state of flux. Sometimes images cratered while they were rendrinig. Other times the bits became rearranged in unpredictable ways. 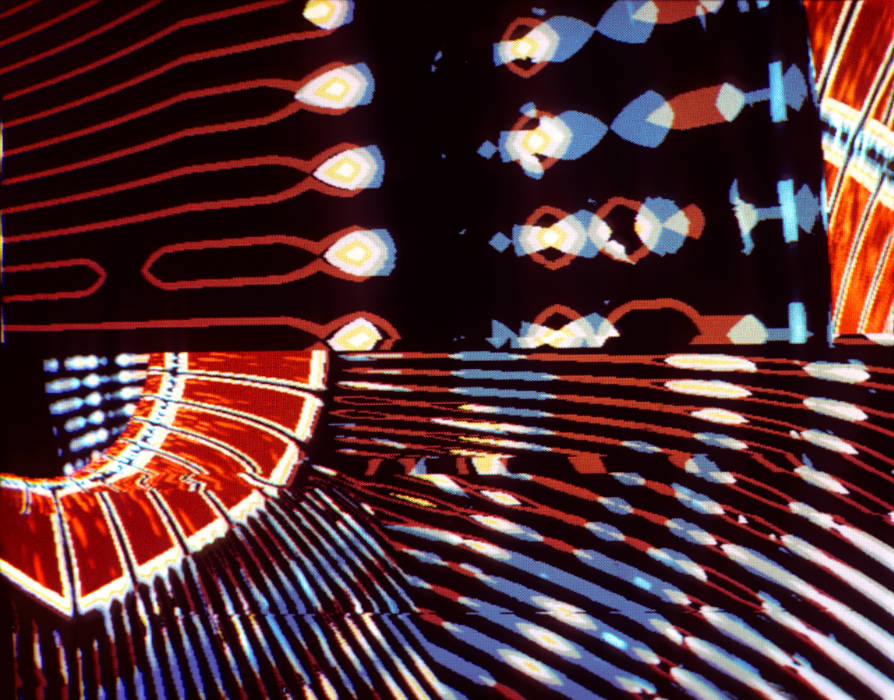 In the 1970s, most people perceived computers as being cold and dehumanizing. Few people on the planet had conceived of, let alone seen, a computer-generated picture.

Somewhere in 1979, several journalists became interested in what I was doing at JPL. When they went to press with the Art-meets-Science story the following year, it ignited the public’s imagination in a big way.

Overnight, my work took off. It appeared in books, magazines, television programs, museum exhibitions, album covers, posters, calendars, and just about anywhere else you could possibly display or transmit an image.

For some reason, of all my pictures from that period, Transjovian Pipeline had the greatest impact. Although it wasn’t my intention when I created it, what the public got out of Pipeline was the sense that digital technology wasn’t intimidating, — it was actually cool. Pipeline is one of the most reproduced art works of the 1980s. It’s the one image I’ll always be associated with. 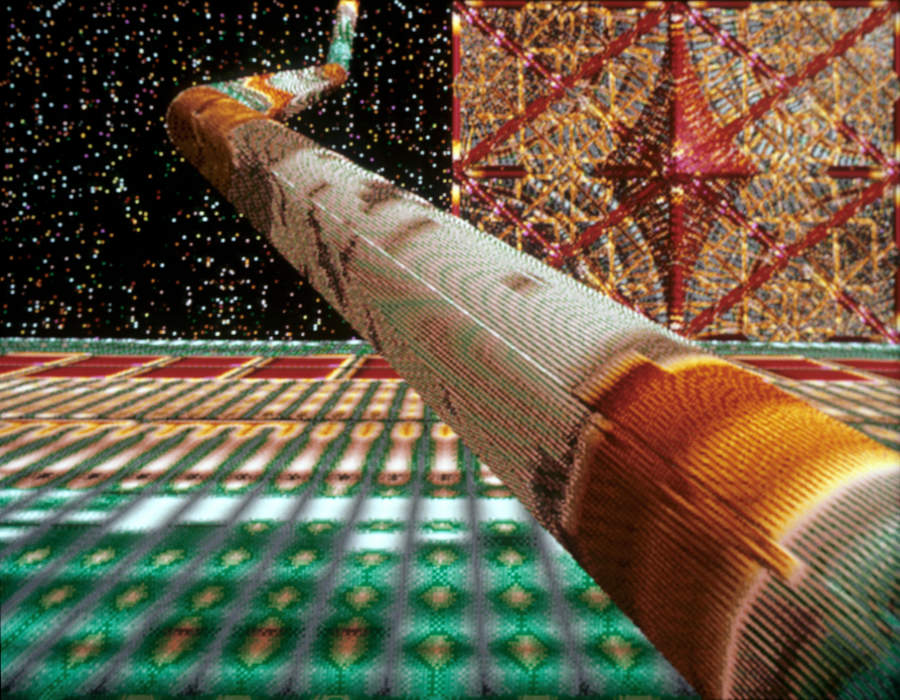 I often worked at the JPL lab for weeks on end, usually late at night. The computers and peripherals in the space produced an audio resonance that became almost palpable in the wee hours.

At those times I sometimes visualized the ambience in the room as a matrix of vibrating wavelengths. 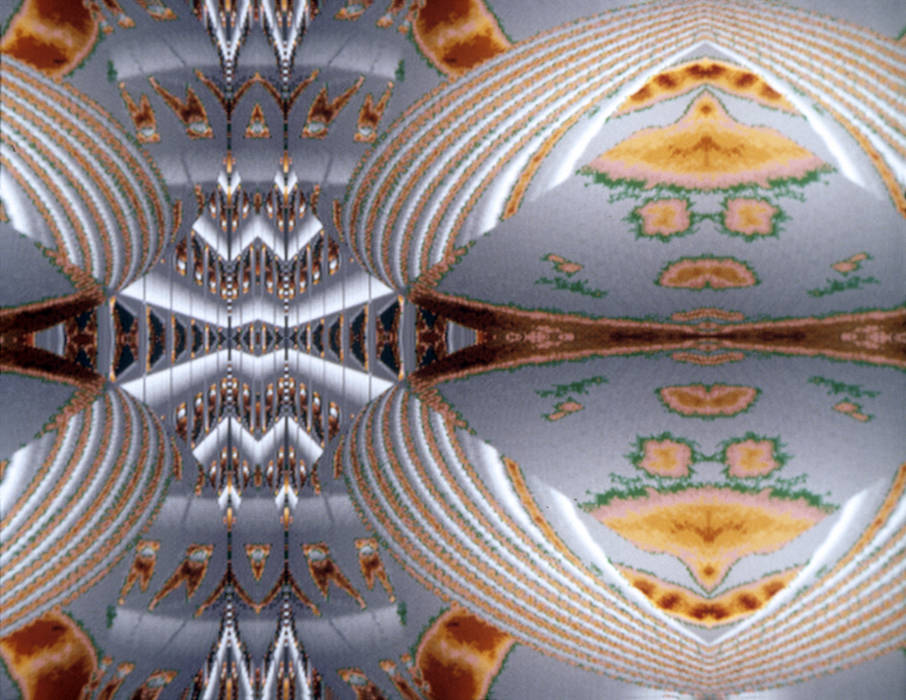 In my early work at JPL, I was able select colors from a total color-space of 16.7 million colors, but I was restricted by the hardware to working with only 256 of them at a time.

That situation changed in 1985, when the lab got a major equipment upgrade that let me access the whole color spectrum at once, which opened the door to pictures like Mar. 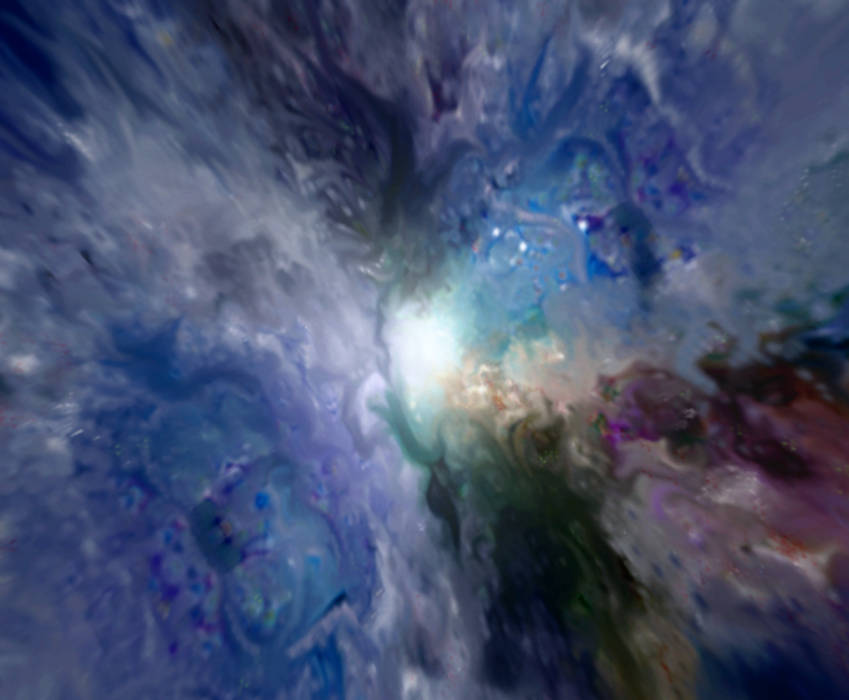 During the 1980s, I spent part of each year in New Mexico. My experiences in the outback led to a new immersive world.

This one focused on clouds and light in pictures like The Faraway that were impossible to create during the Transjovian Pipeline era. 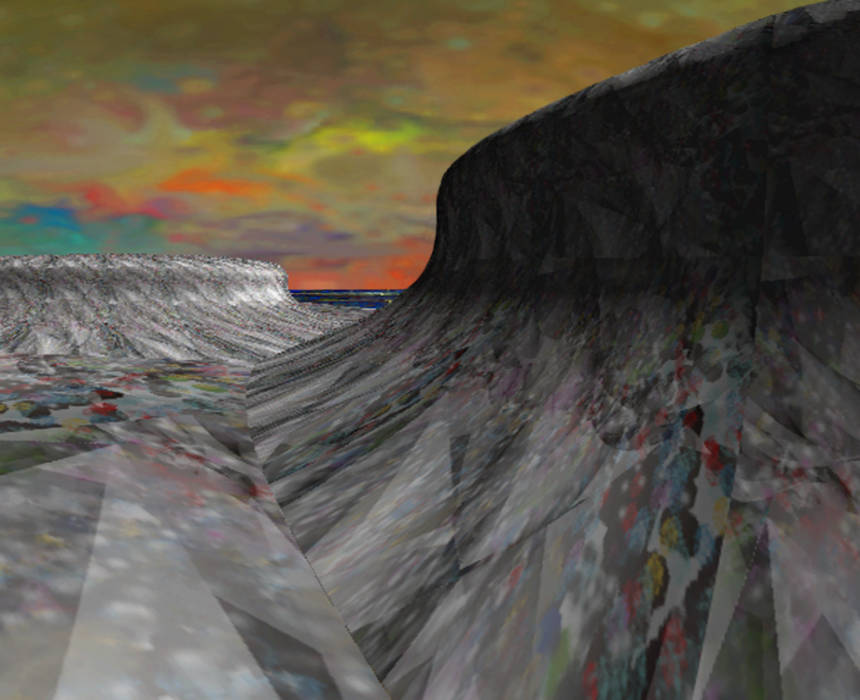 Before I started building immersive worlds, I’d tended to think of composing images in terms of a frame of reference. But once I was able to erase the frame and wander around inside a visual database, I began to think of bits in terms of evolving data structures. By changing a number here and tweaking a parameter there, I could initiate processes that unfolded over time.

In 1988 JPL cut the Graphics Lab’s funding. Everyone who’d made the lab “the lab” either left or was reassigned to another group. The place devolved into an eerie Flying Dutchman of the computer world, full of humming machines with no one to tend them. The only human presence besides me was a security guard who occasionally poked his head in on his nightly rounds.

Polymorph was the last picture I made at JPL. At this point, I was attempting to merge my evolving data structures into my simulated worlds. That was way beyond what the system could handle. Almost every sequence I tried to render crashed. Then somewhere toward the end of the year, the JPL Graphics Lab faded to black. 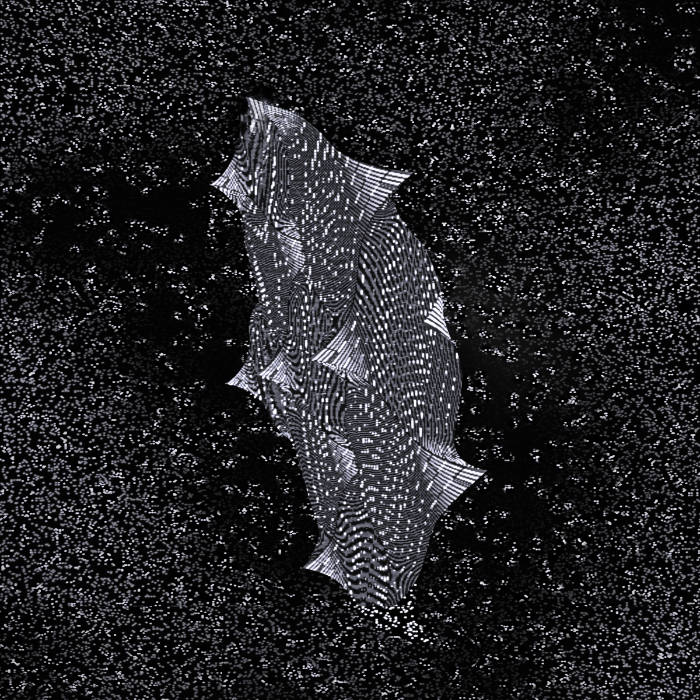 In 1991, I spent a season at Apple Computer in Cupertino, where I was a guest first at Apple’s Advanced Technology Group and then at their Evangelism Lab.

I spent most of my time at the Evangelism Lab in a small room packed to the gills with one of everything that could make pictures with an Apple computer. This included early versions of commercial programs like Photoshop, which were still pretty much a novelty.

All the hardware in the Evangelism lab lived on a table top instead of in a high-tech facility. The software had graphical user interfaces instead of command-line prompts. I was in awe that the programs came with actual manuals I could refer to. I made The Green Mask my first night there. 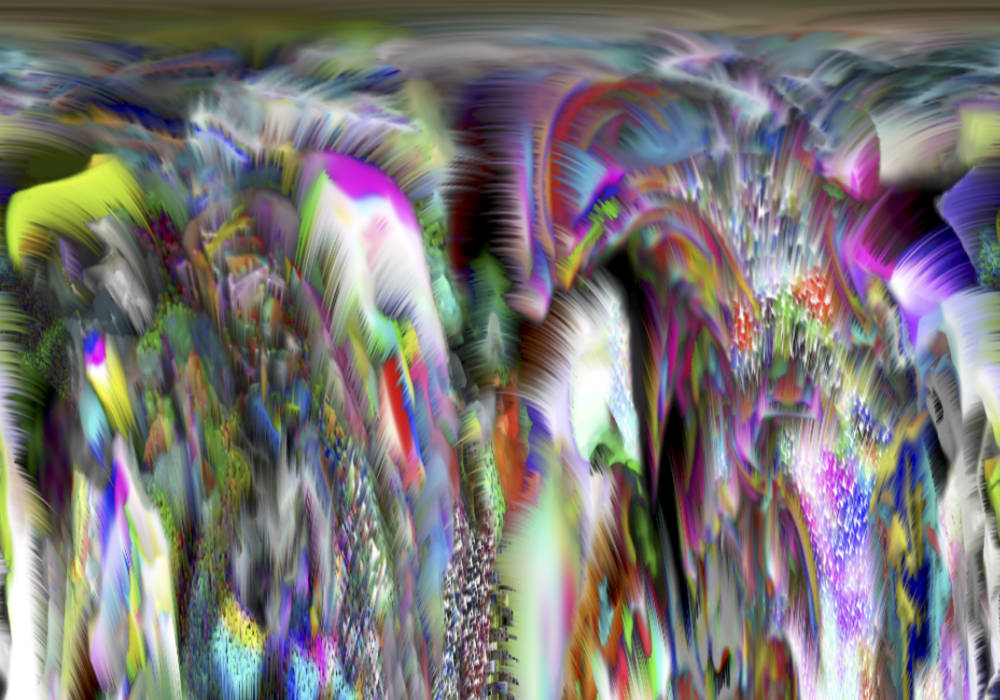 Like my days at JPL, I would show up at the Evangelism lab a little after five in the afternoon when everyone went home, and work until dawn. Most nights I had the place to myself.

I’d been playing with personal computers for a few years, but so far they didn’t pack enough punch to produce the kinds of pictures I was trying to make. My experience at the Evangelism Lab convinced me this was about to change.

In 1995 I built a personal computer from scratch. It cost me over ten thousand dollars and took six months to assemble. For a little while, it was probably the most powerful personal computer in the world. This is the first picture I made with it.

I assembled the beast in a spare room in the back of my house with Alex Pournelle, a computer systems builder whose father Jerry wrote a monthly column for Byte Magazine, which in those days was considered “The Bible of the Computer Industry”.

Cobbling the system together was no mean feat. It was a one-of-a-kind device with more than two dozen separate parts and pieces, each of which we had to configure individually.

Jerry reported on our ongoing traumas building the machine in his column. That yielded an unexpected result. Computer companies started express-shipping us mother boards, graphic cards, and all sorts of other components in the hopes Jerry might shine a light on them in a future  column. By the time we’d tightened the box screws on the first machine, we had the guts for three more.

A few months later, Byte offered me and Alex a web column of our own. We partnered up and leased the basement of the historic Old City Hall in the village of Sierra Madre in the foothills above LA and rechristened it The Byte Media Lab, which doubled as my art studio for the next ten years. 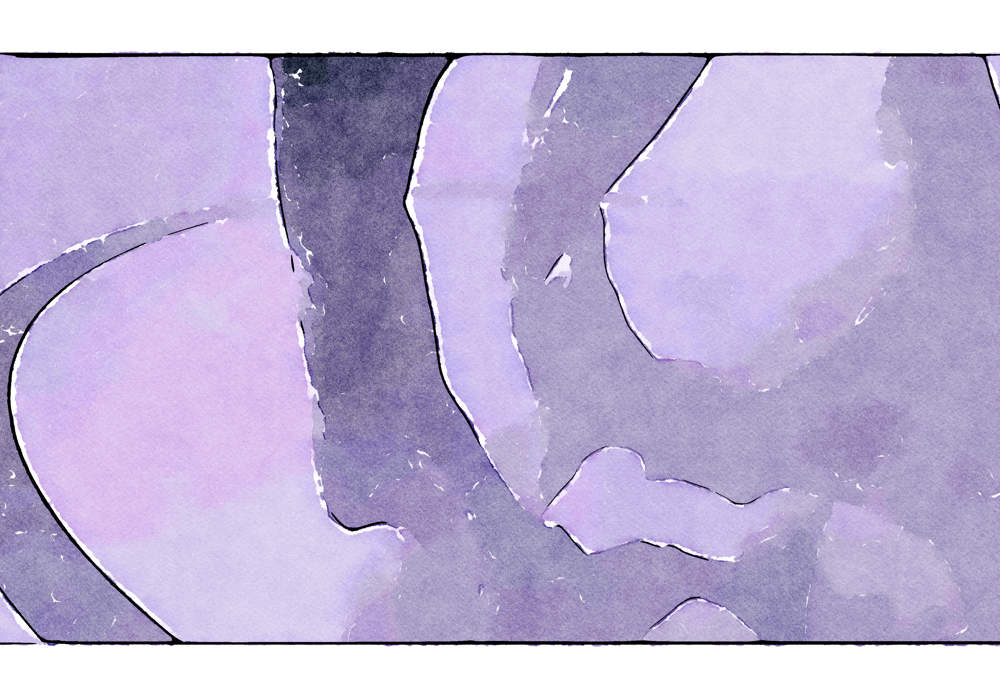 With the support of my new best friends in the computer industry, all sorts of creative possibilities presented themselves.

I could sculpt with 3-D pixels.

I could incorporate gravity, wind, and rain into my simulated worlds.

I could produce archival prints of my digital pictures.

Meanwhile, hardware and software costs fell off a cliff, the whole world hooked up to the internet, and tens of thousands of artists, designers, and filmmakers around the globe joined the digital revolution.

The rest is history.