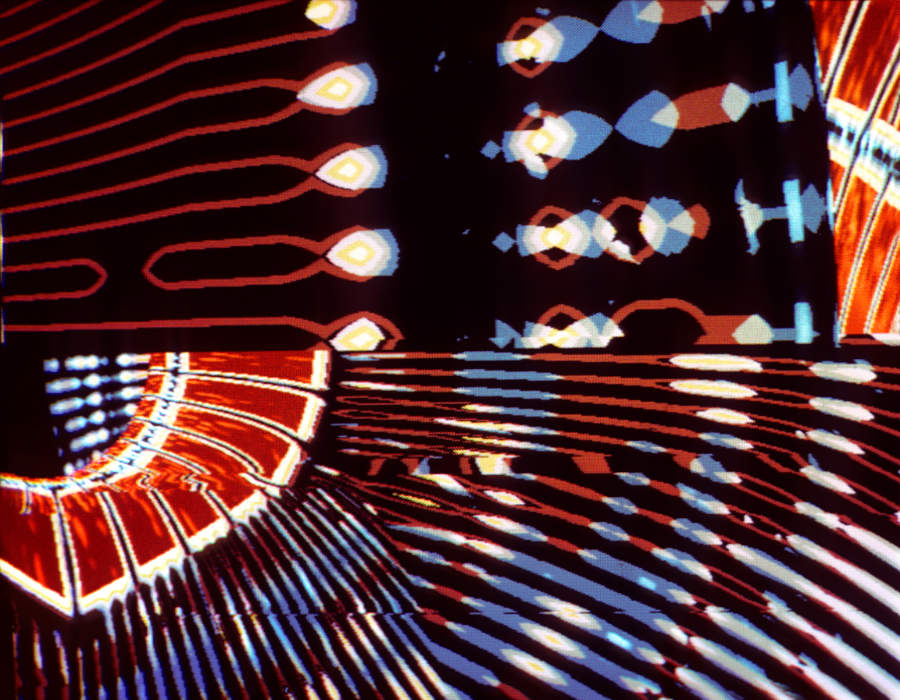 The Christmas holidays were always a productive time for me at JPL. The regular staff took off for a couple weeks, so I had the place to myself, and could work without distractions. On the night of Christmas Eve of 1978, I’d been working around the clock for several days.

Back then, there was no such thing as commercial CG software. Most of the programs we had running in the lab were in various stages of development. None of them had been field-tested in a production environment.

The general procedure for making a picture involved setting up a host of 3D parameters and issuing a command that began the image-rendering process. Then individual pixels marched across the RGB video display, moving left to right and top to bottom, one line at a time, until a complete picture was formed.

Pictures would often crash in mid-render. On any given night, I could expect a disaster or three that required considerable trial and error before I could get all the elements synced up to achieve something resembling what I was aiming for.

Even when everything ran like clockwork, rendering a single frame took the better part of an hour. So if a handful of images crashed at some point during their rendering runs, I’d have very little to show for a night’s work.

Sometimes only a portion of an image’s database would collapse, leaving a partially rendered result on the framebuffer’s display screen. This often yielded unexpected results, which is what happened with Navajo.

My usual MO was to turn out all the lights in the room and watch the first few lines of pixels with an eagle eye to determine if the picture held any promise. Often I would kill an image after only a few lines had rendered, change a few parameters, and start over again. Depending on the composition, often there was no telling what an image did or didn’t have going for it until it was nearly complete.

I’d been tinkering with the picture that became Navajo since early afternoon, and started rendering it around 9:00 in the evening. I was somewhat beat, and since the first few scan lines looked promising, I decided to get some fresh air and wander around the JPL campus, which was utterly deserted except for a skeleton crew of night guards, none of whom were in evidence on this night before Christmas.

After about an hour of cruising around, I made my way back to the darkened lab. When I opened the door, the only light in the place was the framebuffer’s glowing screen. Navajo looked like it was hovering in mid-air.

The top half of the image resembled pretty much what I’d been anticipating. But the bottom half was an utter surprise. The front portion of the main object in the scene had collapsed and disappeared, but the software had continued rendering the object’s interior, converting lighted areas into shadows, and making convex shapes concave.

The final image was a mix of careful planning and pure chance. I never could have come up with it on my own.