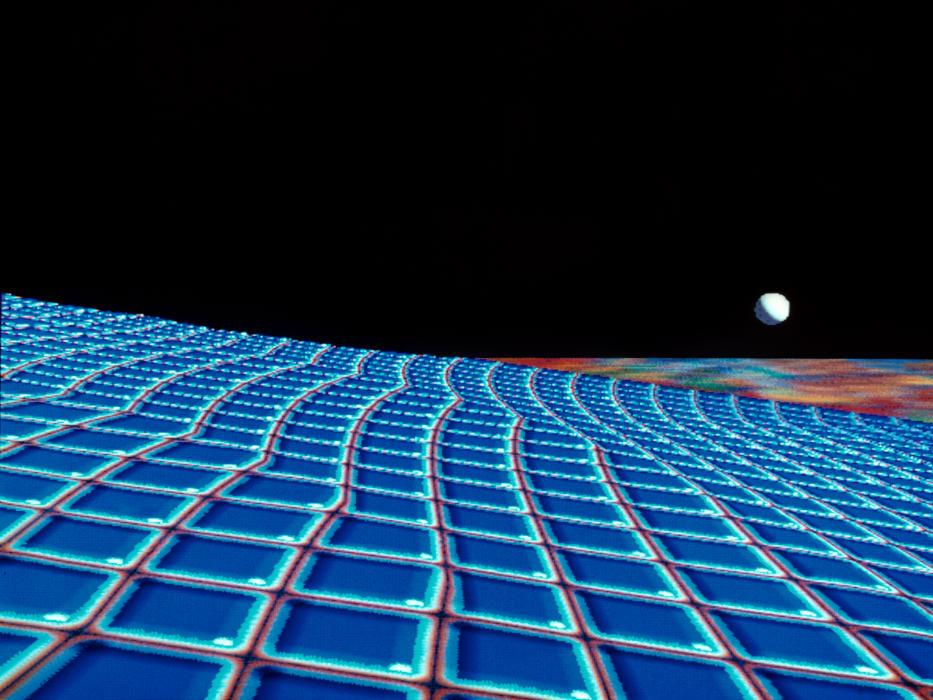 On July 20, 1976, a year before the JPL Graphics Lab came up to speed, NASA’s Viking 1 robotic spacecraft landed on Mars. The Viking Mars Lander program was run out of JPL, and I had the great good fortune to be there the night it touched down.

Twenty-five seconds after Viking landed, its  camera snapped the first closeup picture of another planet and transmitted it back to Earth. It took several minutes for the Lander’s first photograph to reach JPL, and until it arrived, there was no way to know if the spacecraft had survived its multi-million mile journey.

The tension was palpable in JPL’s Von Karman auditorium, where a couple hundred scientists, mission planners, and journalists all stared at a row of blank screens in utter silence, waiting with bated breath.

When the first pixels lit up on the screens, spontaneous cheering and thunderous applause filled the hall. It was the highest group high I’ve ever experienced, and it had a big impact on my imagination.

Once the JPL Graphics Lab opened its doors in 1977, it had to justify its existence to the powers that were. This manifested in the form of a NASA contract to create a scientifically accurate 3D movie of the Voyager 1 spacecraft’s upcoming mission to Jupiter and its moons, which was scheduled to take place in March of 1979. The idea was to release the film to the international broadcast media when the spacecraft reached its target. (The film, which was barely finished in time, exceeded everyone’s expectations and was viewed by billions of people worldwide.)

So starting in 1978, the principal focus of the Graphics Lab’s small staff was directed toward figuring out how to make this movie. Over the course of the year as Voyager got closer and closer to Jupiter, there were ongoing interactions with astrophysicists, mission engineers, and other specialists. In my role as the Lab’s Artist in Residence, I had no responsibilities related to any of this. No deadlines hung over my head. But the sense of wonder surrounding Voyager’s daily progress through deep space permeated the air we all breathed.

Approach was one of my first digital art works to connect with a large audience. It appeared internationally in books, magazines, exhibitions, and many other venues. Most famously, jazz great Herbie Hancock chose it for the cover of his groundbreaking album Future Shock, one of the most influential recordings the era.