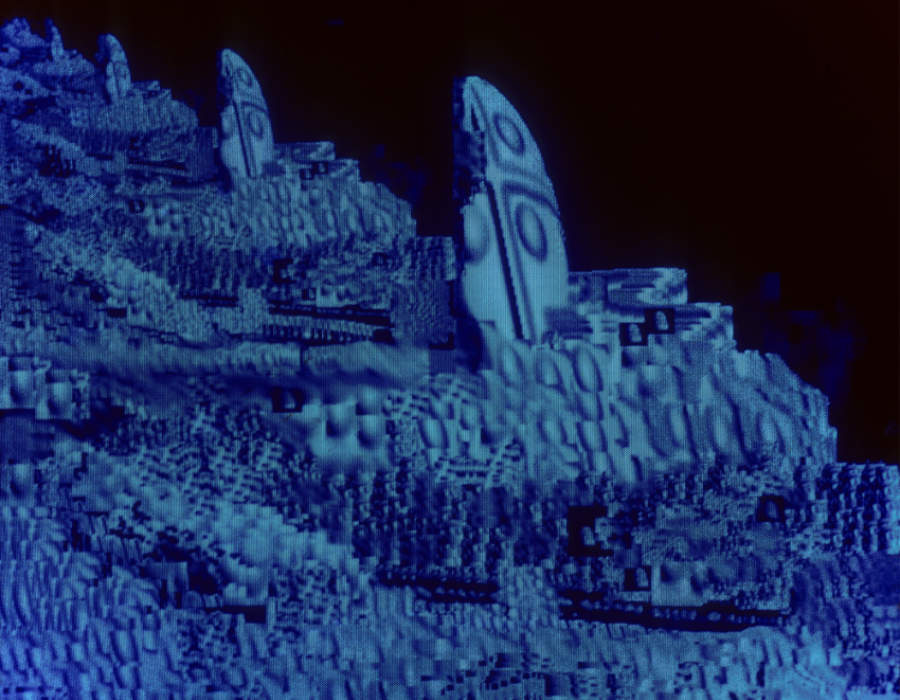 Around the middle of 1977, the JPL Graphics Lab came on line. It was housed in two tiny rooms on the ground floor of a multi-story building situated in a facility the size of a large university campus.

In tandem with this, the lab’s founder and manager, Bob Holzman, hired a young programmer named Jim Blinn, who brought with him a suite of 3D apps he’d written for his graduate thesis at the University of Utah. Jim’s programs were probably the most advanced 3D tools in the world at that time, and for several months, I assiduously worked at getting the hang of them.

Then one night in 1978, all the pieces fell into place, and I made Aku, my first visualization of a digital 3D world. Here’s my recollection of how it happened:

On the night of May 10, 1978, I got to the lab a little after 6:00 in the evening. The building’s day crew, which included astrophysicists, spacecraft engineers, computer system operators, project managers, and their staffs, had all gone home. With the exception of a night guard making his rounds, I had the place to myself.

In those days, the last picture that had been rendered with the framebuffer (there were maybe a half dozen of them in the world) remained on the display screen until a new set of pixels took its place.

On this particular evening, I found an image of a sphere with a kind of rivet texture on it. Our friend Lance Williams at the New York Institute of Technology had created the texture for a picture Jim was working on for the upcoming 1978 ACM Siggraph conference, where he was planning to introduce the technique of applying “bump mapped” raised textures to the surfaces of 3D objects (a huge deal back then!).

I started idly noodling around with the sphere to get warmed up for the night, and as I did, something clicked inside my head. For the first time, I felt I that instead of simply creating 3D objects and moving them around in space, I was composing with the digital medium.

The virtual space represented in Aku has 3D elements, but it isn’t yet a true virtual world. It’s more of a two-and-three-quarters-D world that incorporates 3D modeling, pixel-matrix projections, and digital painting. But on a conceptual level, it was a predictor of where I was headed.

I finished the picture a little before sunrise, and sat staring at it for a while. I felt as if I was planting a flag in completely unexplored territory.

Then it occurred to me that because until this moment I’d not previously produced any images at JPL I considered worth preserving, I had no idea how to save the picture. If someone else used the frame buffer to render a new image, this one would disappear forever.

So I tore a piece of paper off a yellow legal pad, wrote “Please Save this Picture” on it in felt marker, and taped the page onto the display screen. Then I drove home, climbed into bed, and fell into a deep sleep.

After I woke up the next afternoon, I headed back to the lab. To my relief, the picture was still on the screen. Julian Gomez, the Lab’s System Engineer, told me he’d come in at 9:00 AM, found my note, called Bob Holzman, and asked him, “What should I do?” Bob said “Save the picture.”

A couple weeks later, Bob commissioned me to make a print of Aku for him, which he framed and hung in the entryway to his home. I don’t know for sure, but I’m guessing this was the first time a 3D image was ever exhibited in a private home as a work of art, which meant a lot to me, because at that time, even entertaining the idea that computers could be used to create art was generally considered laughable, especially by the art world.