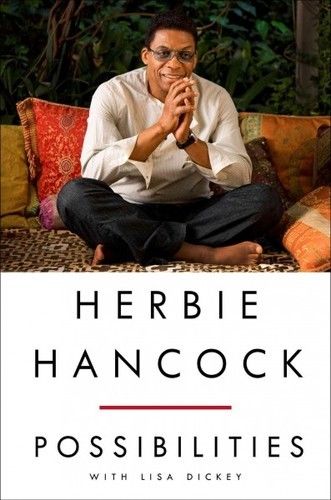 One of the great things about making art is that it opens doors to unexpected places.

One of those doors opened for me when musician Herbie Hancock selected my image Approach for the cover of his album Future Shock, a recording that became a cultural phenomenon (see the cover here).

Herbie recently penned an autobiography called Possibilities. It’s a fascinating journey into the inner workings of his restless mind. The book’s through-line is perfectly expressed in the title: Possibilities.

Every time you pick up a musical instrument or face a blank page, you have a unique opportunity to explore the deepest ranges of your creative potential. But paradoxically, the more successful an artist becomes, the harder it is for him or her to continue investigating new territory. Most artists, of whatever stripe, endlessly repeat the same tropes that brought them their initial success.

In one of the most compelling sections of his narrative, Herbie describes a live performance in which his fingers moved across the keyboard as if with a mind of their own. His energy, or spirit, or whatever you may want to think of it as, created and performed the music independent of his conscious mind.

This level of expression is along the lines of what Hindus and Buddhists refer to as Samadhi: the perfect union of the artist with his medium, a state of awareness in which there is no separation between the composer and the composed.  When this happens, the artist becomes a vessel for the unconstrained manifestation of the force of the Universe, a pure conduit for the channeling of consciousness.

It takes great determination and conviction over the course of a career to keep opening paths that lead to new conceptual realms. Sometimes it feels like you’re jumping off a cliff. Other times the whole enterprise just won’t come together, no matter how much effort you put into it.

But as Herbie makes clear, when you’re fortunate enough to enter the zone, it’s pure magic. The work creates itself, and you find yourself traveling through mysterious new worlds where there aren’t yet any footprints in the valley.

Possibilites, by Herbie Hancock with Lisa Dickey, 2014. Published by Viking and  Penguin Audiobooks